It is common knowledge that the Mughals loved almost everything ostentatious and lavish. From their preference in the art to their choice of decor, everything had an air of luxury around it. Needless to say, the beauty of those things was also incomparable. The Mughals had come from a land whose art was much different from what they got to see in the Indian subcontinent. Babur tried to bring the Persian art style into the structures of buildings and various gardens that he built, but these things did not last.

After the reign of the Mughals was interrupted due to Humayun’s defeat at the hands of Sher Shah Suri, it was the Mughal Emperor Akbar who helped art flourish in his empire. After him, his legacy was carried on by his son Jahangir and grandson Shah Jahan. They promoted art and the rug making industry in their own ways. Here are some details regarding the Mughal Emperors’ passion for not only art but rugs too.

Introduction of Different Arts And Rugs

Akbar was the first Mughal Emperor who took an active initiative in introducing new art and culture to his Empire. It is not surprising that he was also the one who brought Persian rug makers to teach Indian artisans the art of making Persian pile rugs. After Akbar came into power, he managed to conquer several kingdoms, all of which had different cultures and art styles. Akbar had no qualms about mixing those art styles into the current style of his empire to represent all those different cultures. The craftsmen and artisans of those kingdoms brought their knowledge to the empire upon merging with it and refined the Mughal arts some more. This is similar to what happened when the Indian people were introduced to Persian rugs. The Persian rug makers arrived in Agra and immediately started teaching their style of rug making. They taught it to the artisans of not only that city but other major cities under the control of the Mughal Empire as well. This resulted in Indian artisans making some of the best Mughal carpets.

Evolution of Arts and Rugs During the Reign of Mughals

The art style changed during the Mughal reign. It started under Emperor Akbar’s rules, but it continued through Jahangir and Shah Jahan’s rules as well. When new art styles were introduced to the existing ones, a new kind of art emerged that was so distinct that it came to be called Mughal Art. Akbar was open to the art of the different kingdoms that he conquered. He also used the art represented by different religions in the architecture, interior decor, paintings, and more in his empire. 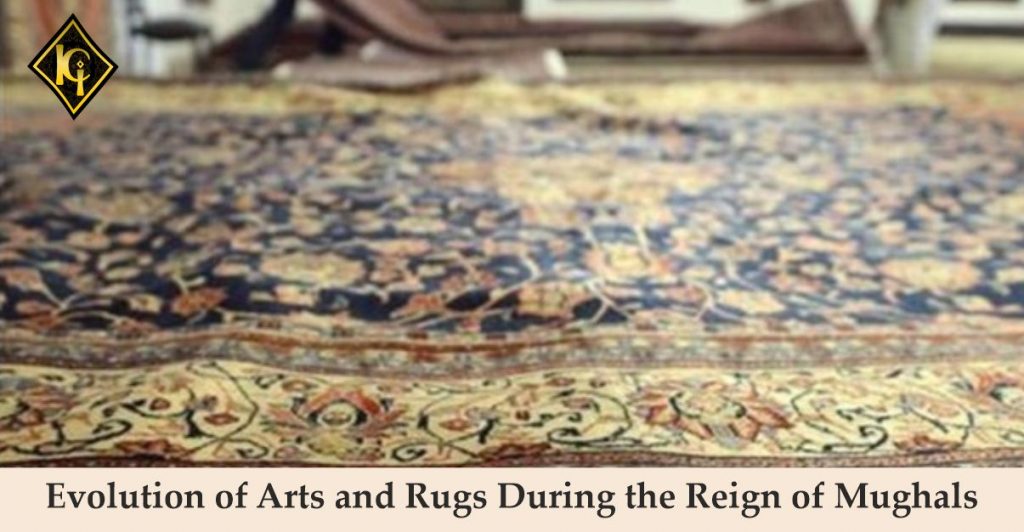 This integrated the beauty of every culture in the subcontinent with the beautiful art style that the Mughals brought with them. This integration affected the rug making industry as well. Earlier, most Indians used to have Dhurries in their homes, but Persian rugs started to be made for the residences of the royals and nobles. The artisans were prompted to mix their style with the one they learned from the Persian rug makers, and this is how carpet manufacturers in India made rugs that we know today as Mughal.

Popularity of Mughal Art and Rugs

Carpet making was not limited to its industry, Akbar introduced it in prisons as a reformative technique. Soon, the prisoners in various jails were making carpets that even outshone skilled artisans. They wove carpets in different patterns, including incorporating the depictions of the Taj Mahal and major jails in different cities. They also held competitions between different jails for carpet making. This not only brought about the desired result of reforming the prisoners, but also increased the popularity of rugs and their art style. 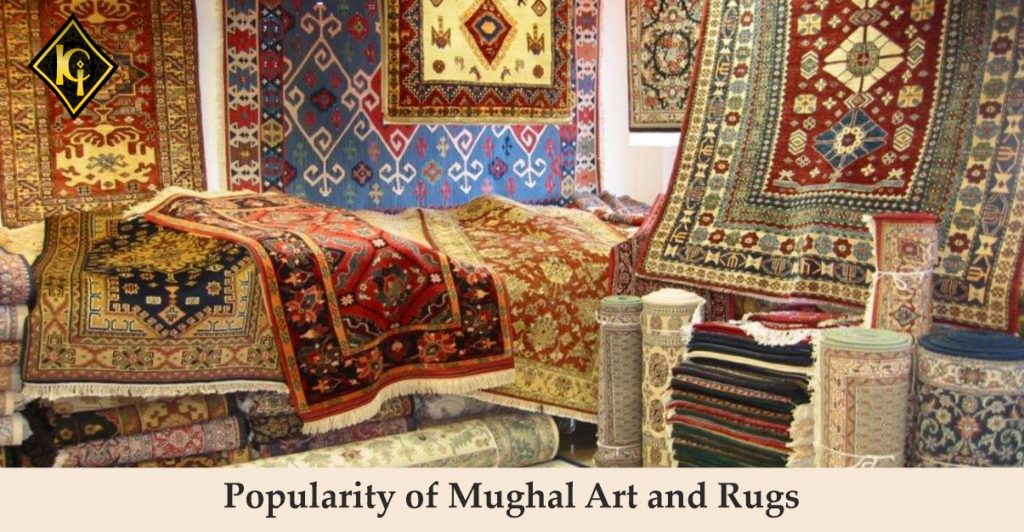 Many such carpets can now be seen in any carpet art gallery in India. The Mughals were so passionate about art and rugs that they would feature lavish rugs in their paintings as well. Emperor Jahangir was a connoisseur of art and he promoted it whole-heartedly. He loved beauty in every way, shape or form, and during his rule, the empire grew beautiful. Every type of artist and their work, including rugs, were valued. More and more styles of art were introduced, like miniature paintings.

Importance of Art and Rugs in the Lives of Mughals

During Jahangir’s reign, art flourished, and with it the carpet making industry. The Mughals loved to surround themselves with beauty, so it meant that there was art all around. Carpets were also a big part of the lives of the Mughals. Since most of them sat on floors, they adorned the floors with carpets with mesmerizing patterns to not just enhance the look of the chambers where they were sitting but also for their comfort. There were not many places inside the palaces that remained bare. 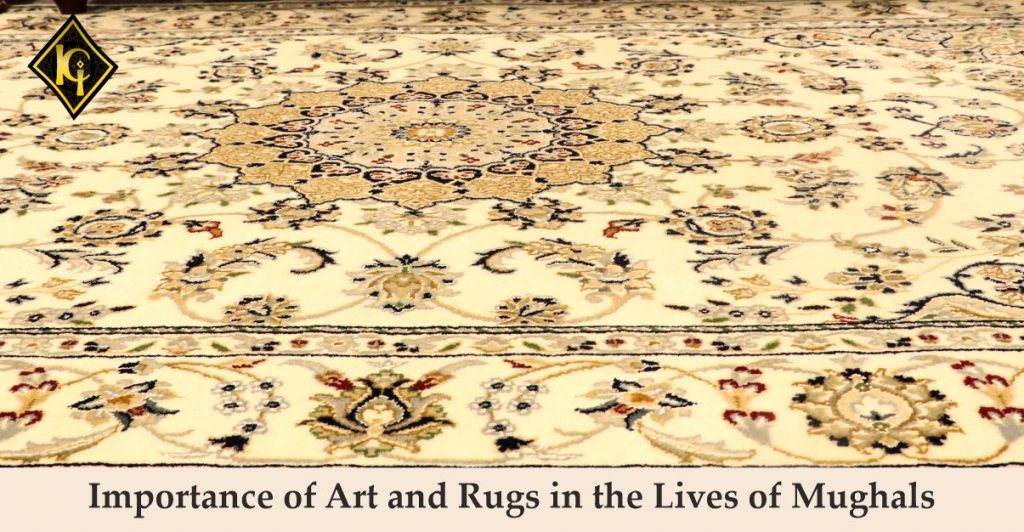 The floors were often covered in one type of carpet or another. They served the dual purpose of providing comfort and warmth but also of bringing beauty to the interior. They often went well with the paintings and other pieces of art in different chambers of the palaces. There is much evidence of the love the Mughals had for art and carpets. It is the reason why, in present times, we depict the Mughals surrounded by luxury and art of different kinds, standing or sitting on lavish carpets with intricate patterns and bright colors.

Art and carpets were a huge part of the legacy that the Mughals left after their reign ended. Their passion for these two things is visible from the traces they left of themselves in this subcontinent. They are remembered in present times through these traces. You can find the popular art of the Mughal empire in art galleries, but it can also be found in the style of carpets made to this day.

If you wish to bring a piece of the Mughal Era into your home, you can buy handmade rugs from the Mughal collection at any carpet shop. You will find some of the best work in Agra, the city that was the most influenced by the Mughals and their passion for all things beautiful and luxurious.

10 of the World’s Most Expensive Carpets That Will Leave You in Awe!

History and Collection of Carpets in India