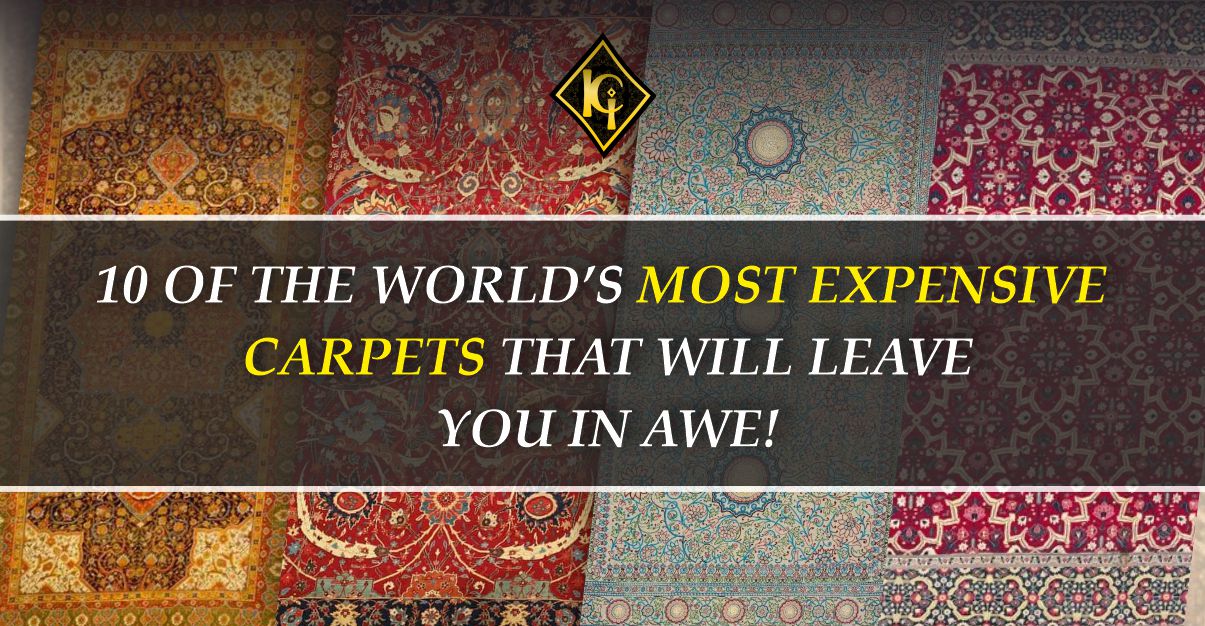 When we talk about carpets, almost instantly we think of the word “Persian”. It is no secret that the concept of carpet started somewhere in the Middle East. Ancient legends and folklore of the Middle East mention rugs and carpets (remember the good old story of Aladdin with his flying carpet?). The history of carpet weaving starts around 2500 years ago in Persia. Carpets were woven by weavers to cover the floors in the camps of the nomads. These expert skills in weaving carpets were passed from generation to generation. Finally, the tradition and occupation of carpet weaving gradually spread all across the world through the dispersion of the Persian Empire.

Now, carpets and rugs are an indispensable part of every modern home. It is usually the first thing you see when you enter a residence. Carpets also act as the focal point of common areas like the living room or dining room. Interior designers and decorators all agree that splurging a bit over your budget on a statement carpet is totally worth it. However, the owners of the rugs mentioned in this article took splurging to a whole other level! So, continue reading the article to know all about the world’s most expensive carpets and their worth.

All previous records for the sale of an Islamic carpet were destroyed by The Clark Sickle Leaf Carpet, which was sold at Sotheby’s for a bid of $33.7 million. After a 10-minute multi-bidder fight, the 17th-century carpet with its remarkable sickle-leaf pattern was finally sold to an anonymous bidder. The artefact, which was most likely woven in Kirman, has a distinctive elegance and still exhibits exceptional quality despite its age. These characteristics all contributed to its rarity and record-breaking price. 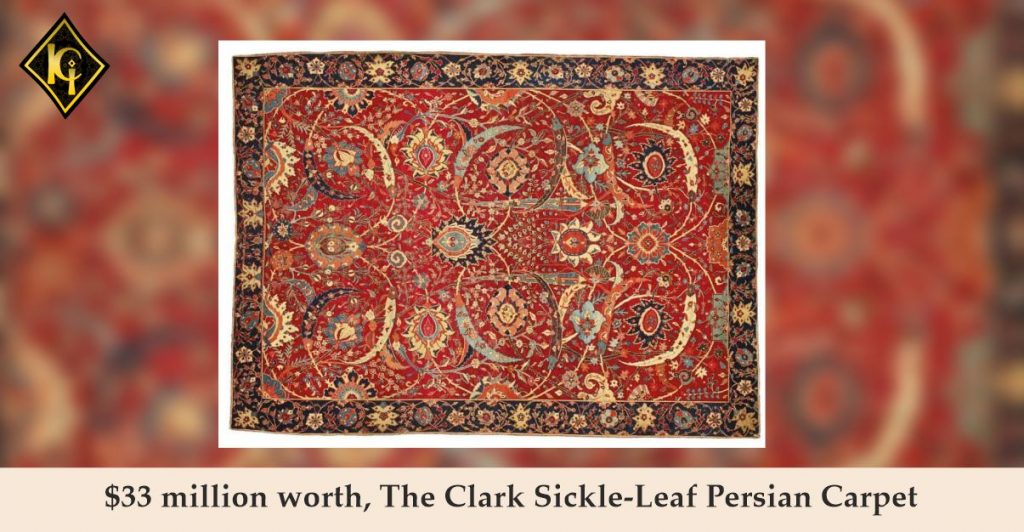 The Kirman Vase rug was acknowledged as the first known rug to have the renowned and rare Herati design. It is embellished with vibrant flowers, leaves, and branches on a striking blue background and has a wavy finish. It is one of the most stunning rugs historically.

The auction at Christie’s auction house attracted a remarkable number of participants, and the bidding began at £150,000. The rug was ultimately sold for $9.6 million in 2013, making history as one of the most expensive rugs ever. 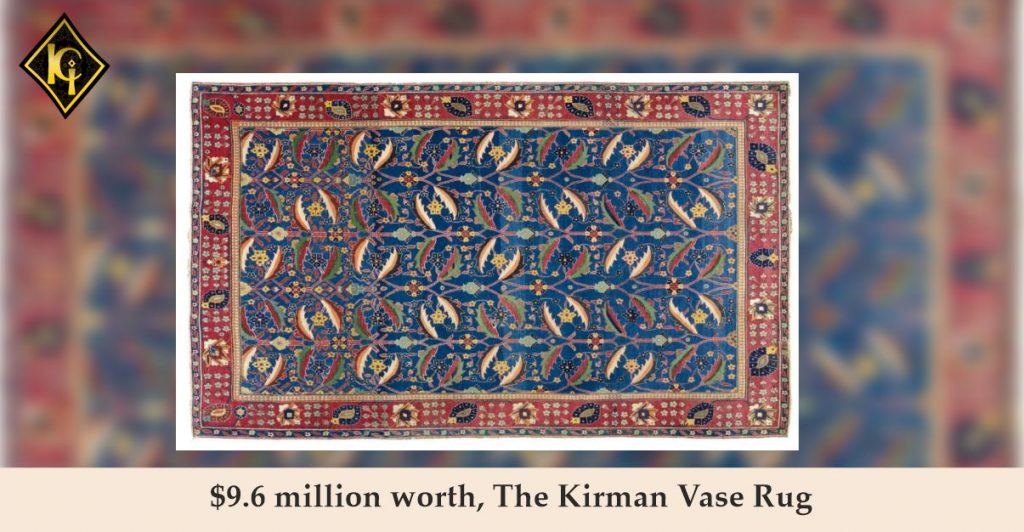 The 18th-century North Indian Pashmina wool carpet measures 12.9 feet by 13.6 feet. It has a rich scarlet background that is accentuated with a golden latticework pattern of interlocking 12-point stars that surround symmetrical clusters of jasmine and lotus blossoms. It is one of only 12 Millefleur ( a thousand flowers) rugs from the era. Experts and critics call it “the most magnificent of all decorative carpets.” This piece is a legacy of the fine Mughal craftsmanship of rugs and carpets from India.

The Pearl Carpet of Baroda was commissioned by Khande Rao Gaekwad, the Maharaja of Baroda, in 1865 for the Prophet Muhammad’s mausoleum in Medina, Saudi Arabia. The extraordinary attention to detail makes this wonderful tapestry shine like a piece of jewelry. The base of silk and beautiful deer hide, millions of Basra pearls, rubies, emeralds, and other precious stones make this specific piece so remarkable. It is one of the most prestigious examples of the craftsmanship of Indian hand-knotted rugs. 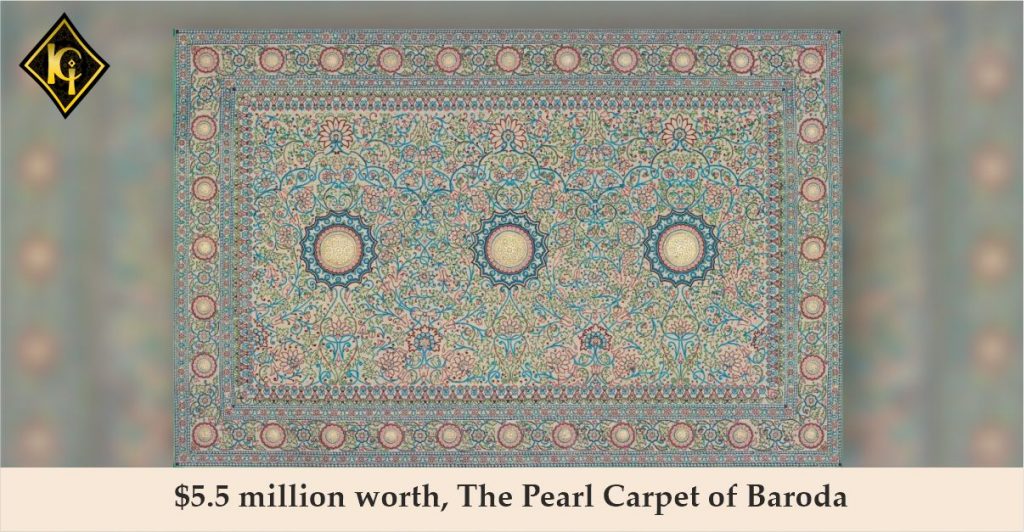 Pierre-Josse Perrot created a gorgeous carpet that is adorned with exquisite workmanship. The intricate, nearly three-dimensional design of this work, which depicts the French royal arms from the 18th century as well as military honors, flowers, and ornaments, will definitely wow you. The Garde-Meuble family bought the carpet in 1842 and delivered it to the Château de Fontainebleau, where it remains located today. 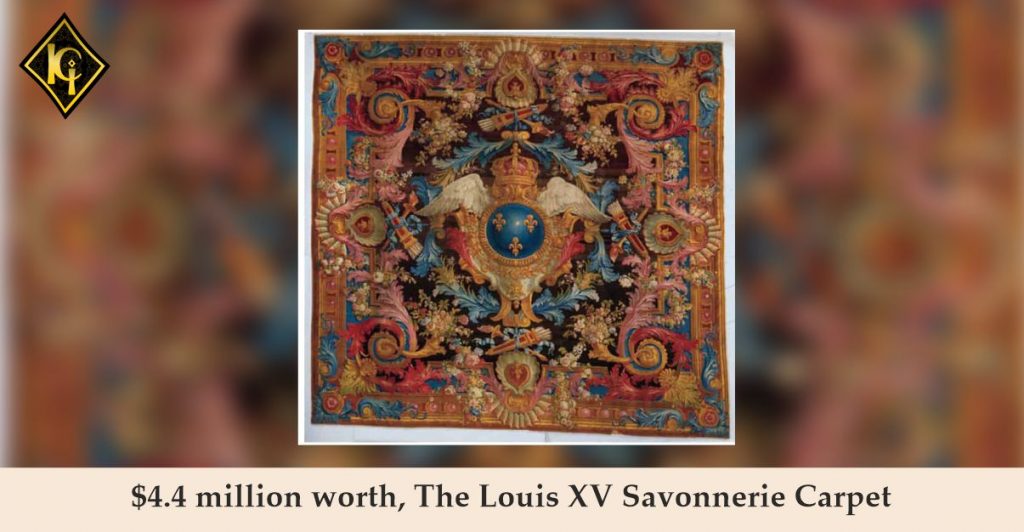 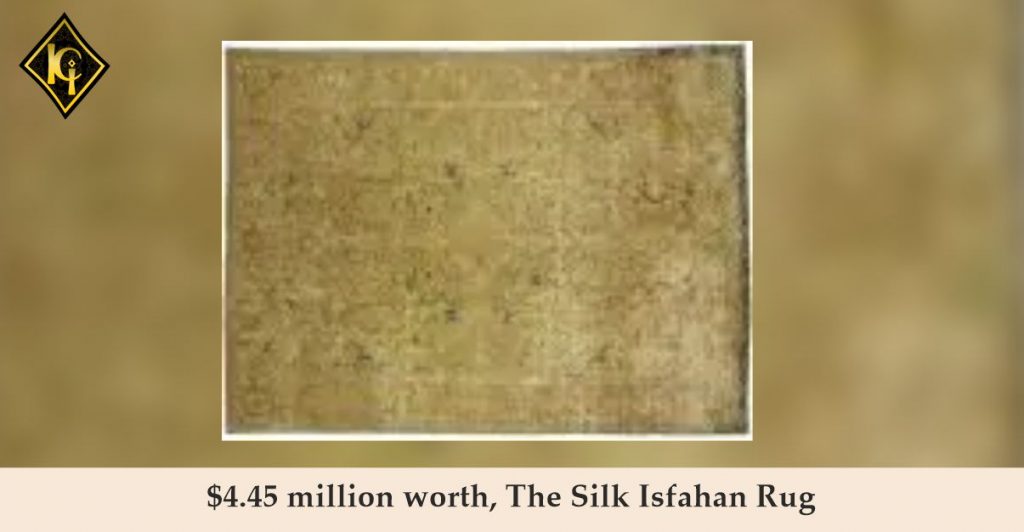 We knew we couldn’t write about pricey carpets without bringing up the infamous Nazi art robbery during World War II. This 17th-century rug was stolen from the Austrian Rothschild family. The Austrian government finally gave it back to the family in 1999. The Museum of Islamic Art in Qatar now features the Rothschild Tabriz Medallion Carpet.

This Safavid prayer rug was valued between $127,368 and $191,052. The Nastaliq-inscribed Persian carpet from the 1575 era fetched a whopping $4.3 million, ranking it as one of the most expensive carpets ever sold at auction. The inscriptions imply that it might have been a diplomatic gift given to the Ottoman Turks by the Safavid Persian court. 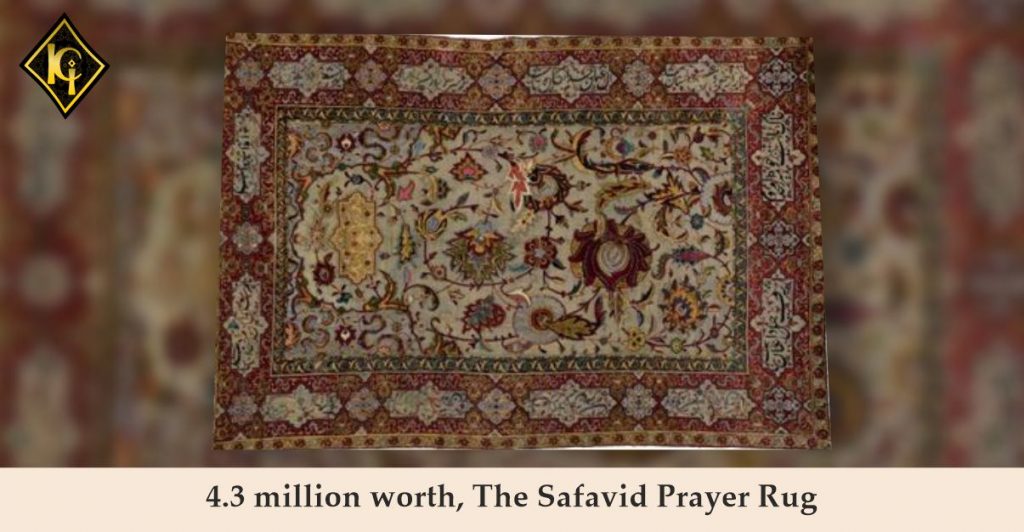 For the bulk manufacture of Persian rugs to be exported to the west, a swarm of British and American businesses hired local carpet manufacturing companies. The Ziegler Mahal carpet originated in Sultanabad (Arak), a major rug-producing region. The Ziegler Mahal carpet features beautiful corner medallions and central floral ornaments on a plain or light-colored background that contrasts with the body of the design. 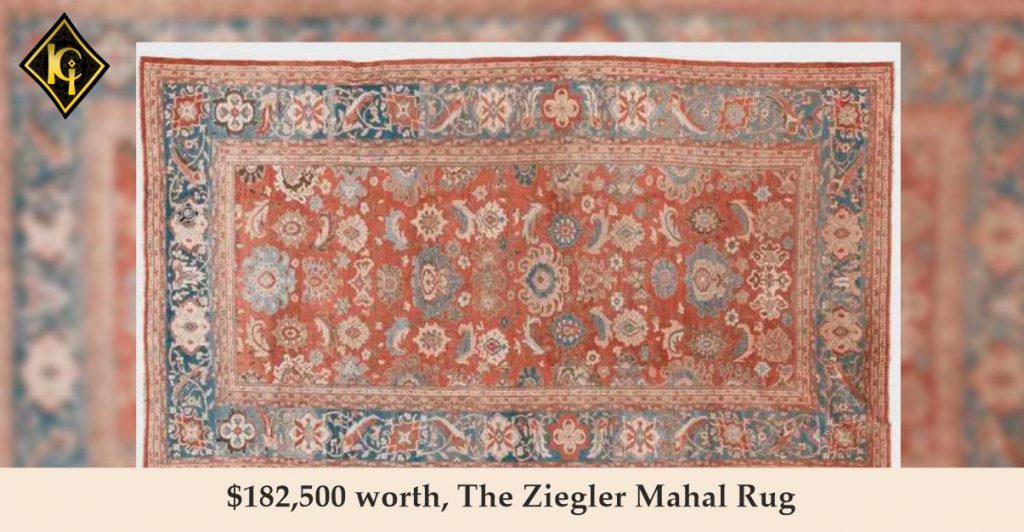 The final item on the list is the Bayeux Tapestry, which was created in Normandy in 1070 and measures about 70 meters by 50 centimeters. It has no price because of its inestimable value. The Bayeux Tapestry is technically different from a carpet since it is woven on linen rather than knots. The tapestry was embroidered by nuns using colored thread. It is thought to have taken roughly 10 years to finish this tapestry. The Bayeux tapestry bears the imprint of nearly a thousand years. Thus, it is one of the rarest gems in world art history. 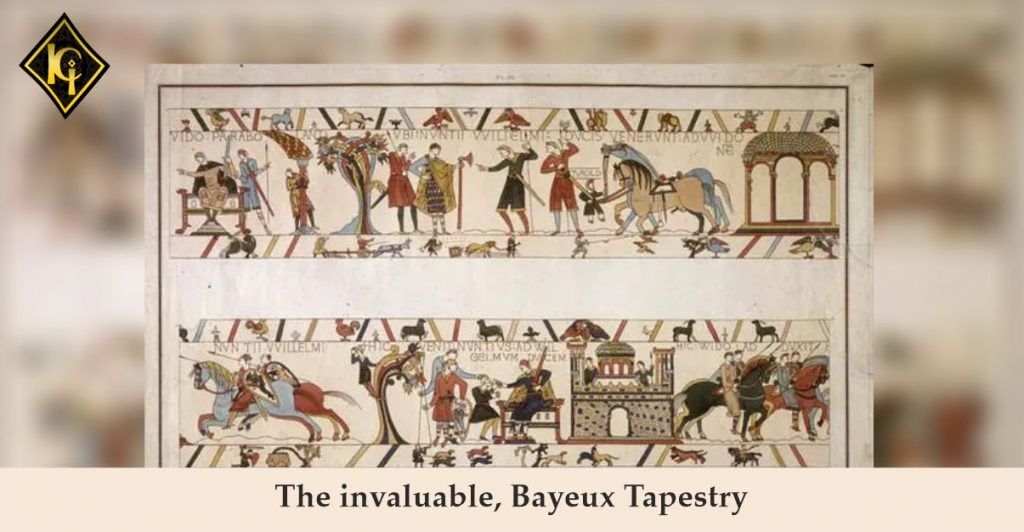 The 10 most costly rugs in the world share two crucial characteristics: tradition and history. Originating in Persia, the tradition of carpet making spread across the globe to enrich us with some of the most valuable pieces of art.

Globalization and trade have churned out various centers of carpet making in the modern world. One such center is Agra. If you are an art connoisseur yourself and are wondering about the best place to buy rugs in Agra, We’ve got you! Check out our collection of vintage and silk rugs to add unparalleled beauty to your interiors.

History and Collection of Carpets in India

Mughals and Their Passion For Arts and Rugs